It all began one Summer evening back in 2006/7. The Surf Nomad arrived home after a hard day’s graft to find his new neighbour Chris Boy, who had moved in the week before, hard at work in his garage setting up a shaping bay. Now there is nothing that The Surf Nomad loves more than DIY, especially when it it’s surf related, and he saw this as a golden opportunity to not only introduce himself to his new neighbour but also to offer him the benefits of his wealth of surfing experience.

To cut a long story short Chris Boy was a super nice, friendly guy and in exchange for The Nomad’s wisdom, he invited him to make use of the bay if he were interested in knocking out a board for himself. You can probably guess what happened. Before Chris Boy had finished assembling his hand made shaping stand The Nomad had already been to the local materials provider and returned with a shipment of blanks and an array of crusty old tools ready to go into production.

It was a fantastic summer with long hot days spent getting dusty and itchy in the bay, washing off in the surf and celebrating the joys of life in the evenings strumming guitars and sipping a few lip looseners. Life was good and the foundations of lifelong friendships were forged. In terms of their output, Chris Boy and The Surf Nomad were fairly prolific and between them that summer they managed to crank out 10 boards for themselves (and a few lucky others). Whilst they were prolific and had a lot of fun, the results of their shaping exploits were mixed. The boards they were making were ok but in terms of performance, they weren’t quite hitting the mark they had hoped for.

One day towards the end of the summer The Nomad was up buying some supplies, when he noticed something in the bargain blanks corner. It was a partly machined 6’8″ funboard blank that had been rejected by a local factory. It was selling for about 80% off and, being a lover of bargains, the Nomad was powerless to resist.

Inspiration comes from the past 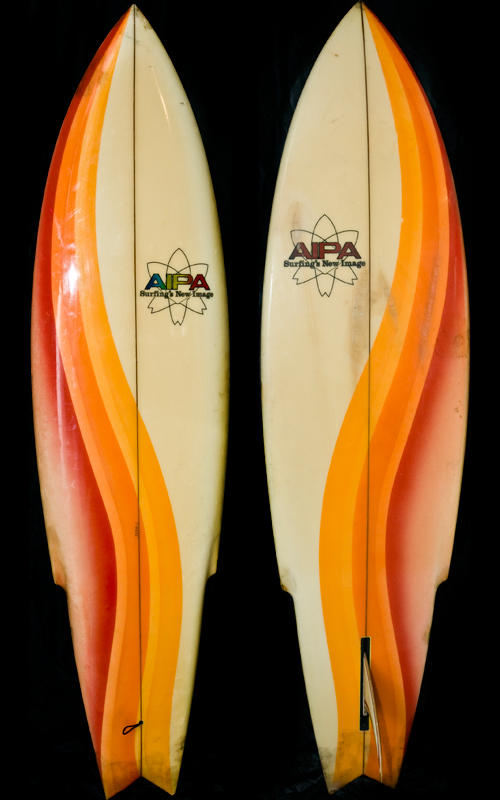 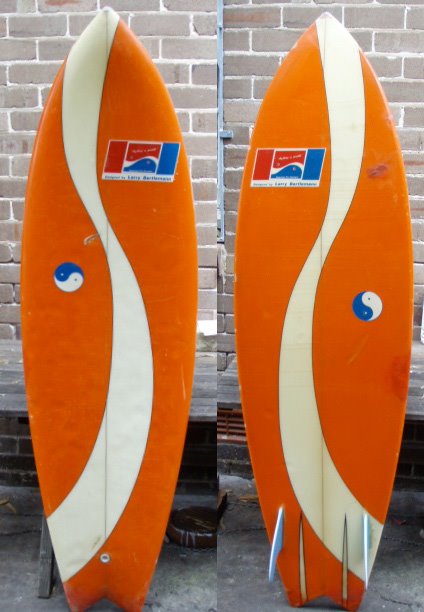 A couple of weeks went by and there was a flat spell so The Nomad drew up a template that he thought might work with the dud blank and got to work on it. The outline was a combination of a Ben Aipa “Stinger” and a Larry Bertlemann “Anything is possible” twin fin. Although the stinger was really only put in because he was lopping 8″ off the tail of a much longer board and needed to bring the width in somehow. When it came to shaping he worked with the machine shaped contours blending the existing concave out into some fairly radical tail Vee.

One of the things he was hoping to avoid was the intense speed tracking that comes from massive keels set way back in the style of a Steve Lis Fish. As a result he forged his own fins based on the shadowy childhood memory of a fin he’d seen in a 1970s surf mag. He set the fins further forward than on most twinnies he had seen right up behind the stingers with the theory that the concave would feed between them and release out over the tail Vee.

(Note: The Nomad remembered the fin he’d seen was called a “dolfin” turns out it was the Mike Hynson Dolfin c.1974 pictured above. He got pretty close considering he had nothing but a memory of them to work with. Ed)

To cut a long story short (yet again) a week or so later he had her sanded down and the dust hosed off. There were waves again so there would be none of this “curing nonsense”, he just waxed her up and headed down the beach.

The surf wasn’t great. It was shoulder high and rideable but the banks were a bit trenchy and the tide a little too full. The Nomad wasn’t expecting a lot from his new board and she she delivered as promised, not a lot. Having spent the preceding 20 years or so riding thrusters he found this thing was downright weird. The first wave on the twinny was an exercise in slapstick that had your old pal Nomad looking around for hidden cameras as the board shot out from under him like he’d stepped on a banana peel. The second wave was a little better but she still felt pretty twitchy. He felt a bit like he was standing on the back of a disgruntled donkey never quite knowing what it was going to do. But there was that speed. Never before nor since had The nomad had a board that would deliver such outrageous velocity right out of the gates and there was something about that that made him persevere.

The next morning the Nomad ripped into the board again with the sander, fine tuning the fins and straightening out the odd imperfection in the glass. By the end of their second session he was coming to understand this new beast, learning her nuances harnessing her speed. She wasn’t so much a donkey now as a much as a sleek young yearling, eager to run but not so eager to be ridden. Little by little they were finding common ground, a meeting of minds as it were between man and board. Neither of them gave in as together they explored one swell after the next. The more The Nomad gave to his new board the more she gave in return.

There were moments when he considered that the more used to this strange two finned beast he became, the less able he would be to ride a NORMAL board. Her quirks were training him to surf differently and if he didn’t stop riding her he may never be able to return. Ultimately he decided that he was having so much fun that he didn’t care. Getting back on a thruster felt like he was surfing with a hefty bag trailing from his leash. He was drunk on her speed, it seemed there was no section that they couldn’t get around and it was from that speed that her true inner beauty was derived.

She went from being a novelty, almost a joke, to being his main ride. He didn’t care that she wasn’t classically beautiful that she was a little heavier than the other boards in the stores. He knew that his friends sniggered at her behind his back as he devotedly rubbed her down with wax but she was his and he was hers. What else mattered.

It came that fateful morning, the 18th of June 2007. It was around 5am and the The Nomad had just woken. He could hear the wind whistling through the partly opened front window indicating a southeaster was brewing. He pulled the covers up against the early winter chill, an onshore wind meant there would be no surfing today. Try as he might however, sleep would not return. There was a sound outside the window something being blown by the wind, a kind of rattling. Suddenly it dawned on him. He had left the Twinny at the base of the stairs after their session the previous evening.

“Fuck” he cursed as he sprang out of bed and raced for the front door. Throwing it open he stepped out into what he was soon to find out was the worst storm for 30 years. By now the wind was gusting up to 90km an hour and he was half way down the stairs when a freak gust of wind almost knocked him off his feet. She was almost within his grasp, she had held her ground but could hold no more, the gust picked her up and tossed her end over end across the yard laying her to rest against a wall of solid brick on the far side. “Noooo” he cried as he raced to her side picking her up then dashing back toward the safety of the house.

Carrying her into the wind was a battle in itself and twice he was almost pitched back down the stairs into the yard. Finally he reached the door and dived inside. The Surf Nomad was beside himself, he knew she would be mangled, no board could withstand a flogging of such magnitude. He could barely bring himself to look at her. He cast his eyes across her plump full rails, his fingers caressing her her deck and underbelly. There was a chip in her tail, a half inch of her nose was smashed and the tip of one of her fins was shattered but that was it. He couldn’t believe it.

It might take an hour or two to put right but the damage was utterly superficial. He smiled to himself. She had been glassed to last, that was one of The Nomads rules 2 layers of 6oz glass top and bottom with an extra tail patch on the deck. It may have made her a little heavier than most but she was strong and it would take more than the 30 Year Storm to break her.

During the day many drama’s unfolded outside the safety of the Nomad’s living room. Trees were uprooted, ships were run aground. They sat together as the news was brought to them via the idiot box. He stroked her rail gently, content in the knowledge that when the storm had passed they would ride again.

Years have gone by since that day. She is no longer the Nomad’s daily ride, she has earned the rest, but for all the boards that have come and gone it is that faithful old twin fin that remains. Some days, when the conditions are just right you will see them together drawing impossibly fast lines across the faces of steep windswept peaks. The Surf Nomad and The Twin Fin of Destiny together as one.

The moral of this story is a simple one.

Even the most beat down reject in the pile has the potential to be the best ride of your life if you give it the love and understanding it needs.

A site dedicated to the personal journey that is surfing